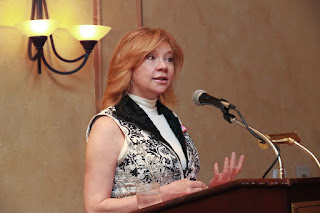 There are times man can fly without wings. It’s the same time you show up to class naked or found yourself stuck in a tar pit facing down a mammoth.

They are our dreams.

Cynthia Richmond was at the Sedona Welcomers monthly meeting as its featured speaker Wednesday, March 23, at the Hilton Sedona Resort at Bell Rock.

Richmond has been interpreting dreams for some time now, appearing on national television on shows like Oprah.

It became obvious that dreams are of a personal nature as Richmond asked the group of women what dreams they wanted more understanding of. It took a little prodding before anyone asked anything, but then quickly got on a roll.

Richmond covered the gamut while there, and showed how all dreams have symbolic meaning. Here are a few of the archetypes she helped explain:
To work on gleaning more information from dreams, Richmond said that talking out loud can be a good start, particularly talking with someone who has worked with dreams. Writing a dream journal can also help, as well as provide a basis for new interpretations down the road.

She said there are things beyond symbolism that happen in dreams as well. She gave creedence to dreams which seem to predict the future, as well as dreams that seem to allow a person to connect with “the other side.”

Richmond pointed out that dreams occur at the lighter stages of sleep, contrary to popular perception. She said dreams tend to cycle in their meaning as the night progresses.

The first dreams of the night deal with the stress of the day before. The middle of the night dreams are usually the ones which deal with fantasy — the flying ones, etc. Dreams more toward morning are ways the subconscious tries to convey a message for the future.

Cynthia Richmond
I am considered an expert of dream work, I love helping people to understand their dreams and use them for guidance, problem solving, inspiration and motivation. I'm a freelance writer for many publications. I teach writing classes and workshops helping people to write the story of their life, which is very fulfilling work, I love my students and have learned so much from them.